Director Mike Bradwell Starring
Bush Theatre, Traverse Theatre
Pumpgirl premiered at the Traverse Theatre at the Edinburgh Fringe in 2006 ina production by the Bush Theatre. It subsequently had a London run in the same year. Pumpgirl had its American premiere in 2007  at the Manhattan Theatre Club in New York.

There's one in every town, and they call her the Pumpgirl. She works in the garage, changes the oil and thinks she's one of the lads. She's sweet on 'No-helmet' Hammy, but he loves no-one but himself. He's out all night with his racing boys, whilst wife Sinead's off on a joyride of her own, with an ache that's about to be cured.

Thom Dibdin
What's On Stage
Spallen’s language matches her elegant plotting. She writes in slangy Irish prose that makes room for beautiful images, so her characters sound like real people who just happen to understand metaphor. Mark Blankenship
Variety
Spallen structures her play like a piece of music, seamlessly slipping between subject and counter-subject, orchestrating faster and slower movements, themes in a formidable coda Lynne Walker
The Independent 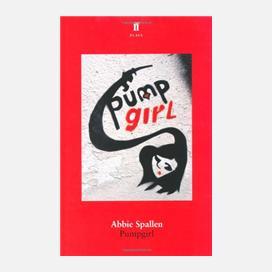