UK & Comm → HarperCollins
A major novel from one of the country’s greatest writers, and the crowning achievement of an astonishing career, Boneland is also the long-awaited conclusion to the story of Colin and Susan – a story that began over fifty years ago in The Weirdstone of Brisingamen.

If the sleeper wakes, the dream dies…

Professor Colin Whisterfield spends his days at Jodrell Bank, using the radio telescope to look for his lost sister in the Pleiades.

At the same time, and in another time, the Watcher cuts the rock and dances, to keep the sky above the earth and the stars flying.

Colin can’t remember; and he remembers too much. Before the age of twelve years and nine months is a blank. After that he recalls everything: where he was, what he was doing, in every minute of every hour of every day.

But Colin will have to remember what happened when he was twelve, if he wants to find his sister. And the Watcher will have to find the Woman. Otherwise the skies will fall, and there will be only winter, wanderers and moon…
Rights

Media
Reviews
"Boneland hooks into the mind, haunting, provoking. Garner writes in the tradition of the folkloric bard: Ted Hughes, Robert Graves; a line of song and power that stretches back to the earliest days. The wizard, the scientist, the poet, shading into one another." Philip Womack
The Telegraph

He deploys short, accurate words better than anyone else writing in English today, and he makes it look simple. Boneland is the strangest, but also the strongest of Garner’s books. It feels like a capstone to a career that has taken him, as a writer, to remarkable places, and returned him to the same place he started, to the landscape of Alderley Edge and to the sleepers under the hill

There is much left unexplained. However, this is a novel for all the children who loved ‘The Weirdstone Of Brisingamen’ but who have now grown up

From Harry Potter to The Hunger Games, adults have been enthusiastically been reading children’s books over recent years. Garner predates the cross over phenomenon by decades, but he has never been just a children’s writer: he’s far richer, odder and deeper than that 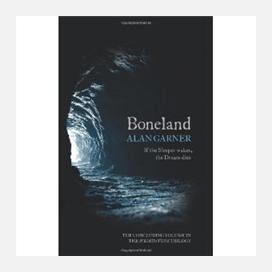