ANZ → Penguin
David Forrester and Elle Nolan are sophisticated, mature people who don’t understand love. They live in a world where love is revered but marriages commonly end in divorce, or worse.

When jaded lawyer David meets Elle, he decides she’s his last chance of happiness and does everything he can to woo her and keep her. Everything, that is, except face his demons.

Elle, a lawyer herself once but now a blossoming filmmaker, is done with heartbreak. But romance can be intoxicating and David is determined.

Over the course of one ill-fated night, David and Elle recount the journey of their love affair. And it begins with David admitting into his dictaphone to the killing of Elle.

Hovering above her broken body, Elle sees the sweep of her life, its triumphs and its mistakes. She sees how, when she first met David, her newfound success as a filmmaker had made her reckless and her idealised ideas about romance misled her.

As the night progresses, we learn their story of a love of unprecedented intensity; a love David was compelled, at turns, to destroy. A love that Elle has yet to survive.

Visceral and compelling, What Came Before creates a chilling modern portrait of the dark side of love.
Rights

Kate Cooper manages the translation rights for What Came Before

Dutch
World
Xander Uitgevers
German
World
btb/Random House Verlag
Media
Reviews
Anna George has a delightful way with words and dispatches the story with style and class . . . Her knowledge of what makes a good story comes together to kick this book into a superbly delivered page turner. Readers will feel they are in good hands.
Bedingo Weekly
This debut bodes well for Anna George's future writing prospects.
Sun-Herald
A chilling, unsettling portrait of an abusive relationship. Pick this one up if you enjoyed The Lovely Bones and Gone Girl.

Who Weekly
Visceral and compelling, What Came Before creates a chilling modern portrait of the dark side of love.
Goodreads
This debut bodes well for Anna George's future writing prospects . . . Intimate character portraits and a twisty ending make it a worthwhile read.
Sunday Examiner
Cleverly conceived, What Came Before is a not only a suspenseful thriller, but a powerful indictment of domestic violence.
Qantas, The Australian Way
This took my breath away. Brilliantly structured, captivating and able to hold my attention right to the surprising ending, it takes a complex subject and helps us understand the motivations of those involved.
Geelong Advertiser
A relationship to rival that of Gone Girl's Nick and Amy, in so many ways.
Sunday Canberra Times
What Came Before is a finely crafted, provocative novel told with a powerful intensity.
Book'd Out Full Review
What Came Before drew me in, held my attention, and didn’t loosen its hold once I turned the last page.
Bookish Ardour Full Review
With its slow-burn relationship, comparisons to Gone Girl are already being made, but it is nothing like it; the only comparison I would make is that it too is beautifully written, startling in its honesty, and should become a bestseller.
Readings
What Came Before was simply, flat out a WOW read - couldn't believe it, couldn't put it down, can't forget it.
Austcrime 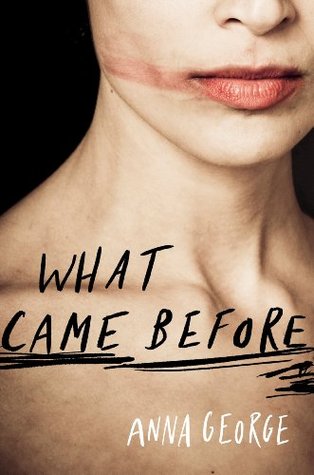