My History: A Memoir of Growing Up

UK & Comm → Weidenfeld & Nicolson (Ed. Alan Samson)
The title of Antonia Fraser's memoir of growing up has a double meaning. It is partly an attempt to recapture the experiences of her Oxford childhood and youth - in Shakespeare's phrase, to 'call back yesterday, bid time return'. But it is also intended as a chronicle of the progress of her love of history since her first discovery of it as a private pleasure when she was a child in the 1930s - her history, as she believed it to be, for the study of history (as her books subsequently attest) has always been an essential part of the enjoyment of life.

When Antonia received as a Christmas present a copy of Our Island Story by H.E. Marshall, it engendered a lifelong interest in history. Queen Matilda, Joan of Arc, Mary Queen of Scots and Flora MacDonald were all formidable women, and it was Mary who fired her emotion to write the story that became the globally bestselling Mary Queen of Scots.

Antonia's mother, born Elizabeth Harman, was the daughter of a Harley Street doctor; her father, Frank Pakenham, was the second son of the Earl of Longford, disliked by his own mother who adored elder brother Edward. As a student at university - rumpled and hesitant - he had met the self-confident and very attractive Elizabeth. This disparate pair were to enjoy a marriage that endured for nearly 70 years. Initially, Frank and Elizabeth were on different political sides - he a Tory, she a Labour candidate - but after being involved in a violent meeting at the local town hall addressed by the Fascist Oswald Mosley, Frank changed allegiance. Antonia's happy childhood in the Sussex of Puck of Pook's Hill was darkened when her brother Thomas contracted polio, and the shadows of the war began to draw closer. Her magical memoir is a vibrant account of childhood and the making of a great narrative historian.
Rights

Melissa Pimentel manages the translation rights for My History: A Memoir of Growing Up

With the emergence of this second memoir, Fraser appears reconciled to the task of revelation – made easier here because it is the history of a writer’s love affair with her vocation, and her nostalgia for the childhood ‘wonderland’ that engendered it. Drawing from letters, journals, memories and conversations, she carves a frieze of her past, following her journey from her parents’ first meeting, culminating in the publication of her biography of the Scottish queen. In MY HISTORY, skillfully wielding her well-honed biographer’s tools, Fraser shows what it felt like to be Antonia Pakenham, eliciting warm fellow feeling even in readers themselves who are nothing like a dame. 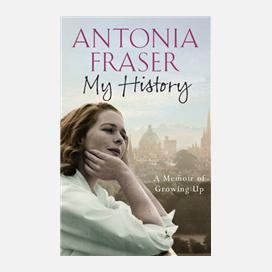