Danny - formerly Dhananjaya Rajaratnam - is an illegal immigrant in Sydney, Australia, denied refugee status after he fled from Sri Lanka. Working as a cleaner, living out of a grocery storeroom, for three years he's been trying to create a new identity for himself. And now, with his beloved vegan girlfriend, Sonja, with his hidden accent and highlights in his hair, he is as close as he has ever come to living a normal life.

But then one morning, Danny learns a female client of his has been murdered. The deed was done with a knife, at a creek he'd been to with her before; and a jacket was left at the scene, which he believes belongs to another of his clients - a doctor with whom Danny knows the woman was having an affair. Suddenly Danny is confronted with a choice: come forward with his knowledge about the crime and risk being deported? Or say nothing, and let justice go undone? Over the course of this day, evaluating the weight of his past, his dreams for the future, and the unpredictable, often absurd reality of living invisibly and undocumented, he must wrestle with his conscience and decide if a person without rights still has responsibilities.

Propulsive, insightful, and full of Aravind Adiga's signature wit and magic,  Amnesty is both a timeless moral struggle and a universal story with particular urgency today.

The audio rights are handled by Karolina Sutton.

[A] taut, thrillerlike novel . . . A well-crafted tale of entrapment, alert to the risk of exploitation that follows immigrants in a new country.

Adiga . . . again scrutinizes the human condition through a haves-vs.-have-not filter with sly wit and narrative ingenuity.

A forceful, urgent thriller for our times

LitHub MOST ANTICIPATED BOOKS OF 2020

A story that will, with plenty of Adiga’s trademark wit, force you to reckon with your own ethical code.

Vulture MOST ANTICIPATED BOOKS OF 2020

He has more to say than most novelists, and about 50 more ways to say it. . . Adiga is a startlingly fine observer . . . Reading him you get a sense of having your finger on the planet’s pulse.

Amnesty is a migrant’s-eye view of Australia, and Adiga conveys how migrants learn to read the signs of their strange new world and devise meaningful taxonomies for it. . . reminds us of the pleasure and understanding that can ensue when writers migrate out of their own experience. 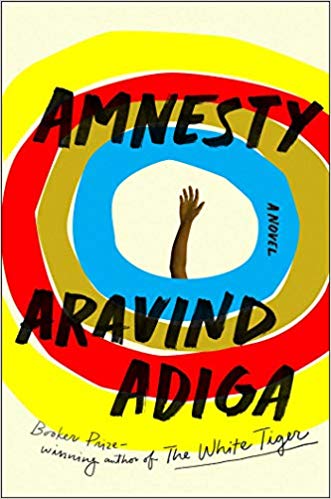