The Heart of Robin Hood

The notorious Robin Hood and his band of outlaws steal from the rich, creating a fearsome reputation amongst those who dare to travel through the mighty forest of sherwood. But they do not share their spoils with the poor and are unloved by the people, who must also pay unfair taxes to the evil Prince John as he plots to steal his brother's crown. In this time of chaos and fear, it is down to Marion to boldly protect the poor and convince Robin that he must listen to his heart if they are to save the country.

Media
Reviews
the Heart of Robin Hood is a festive treat of genuine panache Charles Spencer
The Telegraph
it is staged with such verve and invention that it is impossible not to surrender to it Michael Billington
The Guardian
RSC's outstanding new family show Kate Bassett
Independent on Sunday
Ingenious, sophisticated family entertainment, swash of buckle and full of lovely touches Fiona Mountford
Evening Standard 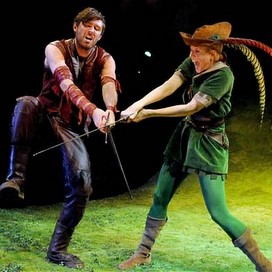