Producer RSC Starring
Courtyard Theatre, Stratford upon Avon
Leontes is the man with the perfect life. Powerful, wealthy and surrounded by a loving family he should be content, but instead he is ill at ease with the world around him. Isolated by a destructive jealousy, he lashes out at those closest to him, losing his wife and son and abandoning his daughter in distant Bohemia.

Sixteen years later, having grown up in a pastoral idyll, Leontes' daughter falls in love with a young visitor, setting in motion a chain of events that could eventually reunite their scattered family.
Media
Reviews
Farr brilliantly suggests the initial happiness and trust of the court with a lovely opening scene Charles Spencer
Daily Telegraph
Farr’s treatment is both intelligent and innovative. Kevin Quarmby
The British Theatre Guide
The Winter's Tale at the Roundhouse, NW1
The play is designed to wring you out in its beginning and end Libby Purves
The Times Full Review
plentiful laughter, bafflement and gladdening memories of blossom-rich, springtide delight Dominic Cavendish
The Telegraph
The strength of Farr's production, however, remains its picture of the Sicilian court dissoloving into chaos through Leontes's insane jealousy Michael Billington
The Guardian
Farr's production of Shakespeare's most moving play is full of rich detail Michael Billington
The Guardian
David Farr’s production of Shakespeare’s late romance has been flawlessly cast and directed with sensitivity, insight and, above all, an enthralling immediacy Charles Isherwood
The New York Times 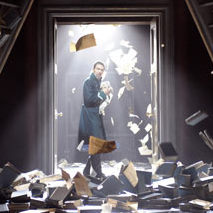