Slade House is on a shorter scale than David's major novels, but is every bit as enthralling and inventive: the story of a haunted house and the five individuals who over the course of thirty-five years disappear inside, told with Mitchell's signature page-turning blend of horror, mystery, realism, irony, and the supernatural, an expansion on a short story Mitchell published on Twitter in 2014 that inhabited the same universe as his previous novel, The Bone Clocks.

Keep your eyes peeled for a small black iron door.

Down the road from a working-class British pub, along the brick wall of a narrow alley, if the conditions are exactly right, you’ll find the entrance to Slade House. A stranger will greet you by name and invite you inside. At first, you won’t want to leave. Later, you’ll find that you can’t. Every nine years, the house’s residents—an odd brother and sister—extend a unique invitation to someone who’s different or lonely: a precocious teenager, a recently divorced policeman, a shy college student. But what really goes on inside Slade House? For those who find out, it’s already too late. . . .

Spanning five decades, from the last days of the 1970s to the present, leaping genres, and barreling toward an astonishing conclusion, this intricately woven novel will pull you into a reality-warping new vision of the haunted house story—as only David Mitchell could imagine it.

SLADE HOUSE, by David Mitchell: Hard to imagine a more finely wrought and chilling tale of the supernatural. One of the rare great ones.

Mitchell’s talent lies in his ability to infuse the supernatural with deep human feeling. It is the human in his work that makes those of us who enjoy his fantastic fictions swallow the fantasy willingly.

'Mitchell’s zestful, joyous recreation of the minutiae of everyday life has a redemptive role. Against the accursed privilege of the immortals, he helps us love the time that dooms us.'

'Ordinarily, I would rather have my soul sucked from a hole in my skull than read a novel that started on Twitter, but this breezy string of murders is a fiendish delight.'

‘Mitchell flaunts his extravagant talent for ventriloquism, with each chapter narrated by a different character, and seamlessly brings together his clashing parallel realities through wordplay so dazzling it seems to defy its own gravitational rules.’

'Mitchell has constructed an ingenious, Russian-doll-style narrative that catches the reader out again and again.'

'Just in time for Halloween, Slade House opens its rusty door on a ghost story that dresses up all the dusty old tropes with Mitchell’s spirit and wit. His fans will need no enticement, but for the curious, too intimidated by Cloud Atlas or even last year’s The Bone Clocks, this little book will go down like fresh gummy worms.'

'Whether one has encountered The Bone Clocks or not, the chilly pleasures of Slade House are abundant, perfect for experiencing during dropping temperatures and shorter days... As the Mitchellverse grows ever more expansive and connected, this short but powerful novel hints at still more marvels to come.'

'Read this little yellow book and you’ll have a fun introduction to not only The Bone Clocks, but Mr. Mitchell’s other work.'

'If you haven't yet read Mitchell, choosing this novel just might make a believer of you.'

'Dark, thrilling, and fun… a thoroughly entertaining ride full of mind games, unexpected twists, and even a few laughs.'

'Seriously creepy... Mitchell is one of the best writers going these days, and Slade House will haunt you for days — and nights — after reading it, mainly because his characters are so normal and human and sympathetic — except for the diabolical twins who have mastered The Shaded Way.'

'In the newest addition to the series, the entertainingly eerie Slade House, the author throws us off balance with a tightly focused and (for him) surprisingly brief novel that seems to have as much in common with Henry James' The Turn of the Screw — to which Mitchell alludes here, obliquely, along with more direct references to Lewis Carroll's Alice's Adventures in Wonderland and other touchstones — as with his own earlier works.'

'Beautifully twisty is pretty much Mitchell's trademark these days. And Slade House does nothing to tarnish his rep.'

'Think The Bone Clocks’s naughty little sister in a fright wig, brandishing a sparkler, yelling “Boo!” – and highlighting an element of Mitchell’s talent that has been present but underexploited from the beginning of the writer’s award-studded career: a rich seam of comedy.'

Mitchell serves up a story that wouldn't be out of place alongside The Turn of the Screw. Ingenious, scary, and downright weird.

'An elegant fright-fest of the highest order… Mitchell masterfully, humorously, combines the classic components of a scary story—old house, dark alley, missing persons — with a realism, when describing the lives of the victims, that is pacy, funny and true. Don’t let any anti-fantasy prejudices keep you from being swept up into his unreal reality.'

'Chinese puzzle box does not do justice to the intricacy and ingenuity of the construction. … it will contribute to one of the most epic works of the 21st century. But the real skill of the book is in its emotional impact.'

'If you haven’t read him yet, Slade House is your 238-page, pocket-size gateway drug.'

Plants died, milk curdled, and my children went slightly feral as I succumbed to the creepy magic of David Mitchell's Slade House. 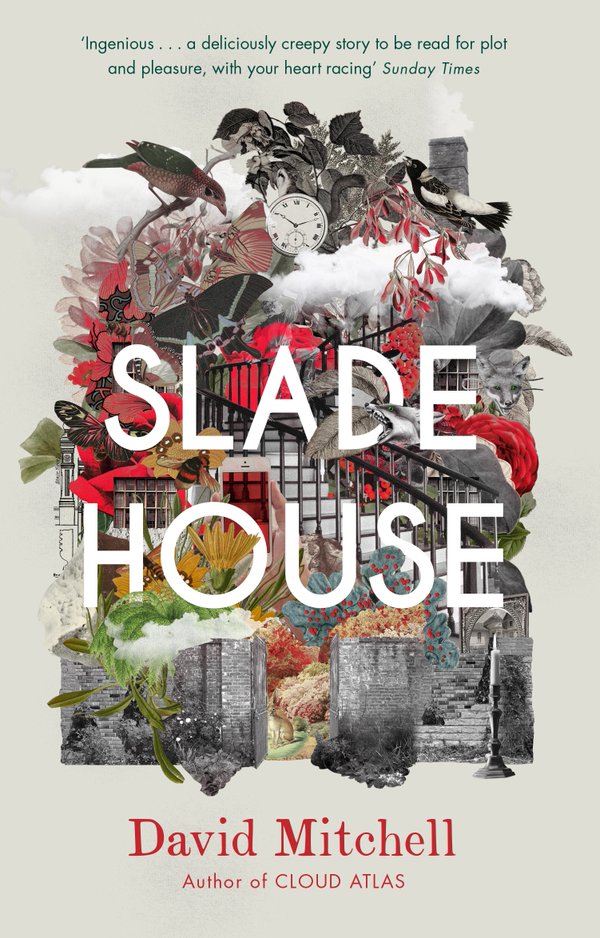