In 1984, teenager Holly Sykes runs away from home, a Gravesend pub. Sixty years later, she is to be found in the far west of Ireland, raising a granddaughter as the world's climate collapses.

In between, Holly is encountered as a barmaid in a Swiss resort by an undergraduate sociopath in 1991; has a child with a foreign correspondent covering the Iraq War in 2003; and, widowed, becomes the confidante of a self-obsessed author of fading powers and reputation during the present decade. Yet these changing personae are only part of the story, as Holly’s life is repeatedly intersected by a slow-motion war between a cult of predatory soul-decanters and a band of vigilantes led by one Doctor Marinus. Holly begins as an unwitting pawn in this war – but may prove to be its decisive weapon.

The arc of a life, a social seismograph, a fantasy of shadows and an inquiry into aging, mortality and survival, The Bone Clocks could only have been written by David Mitchell.
Rights

Mr. Mitchell’s heavy arsenal of talents is showcased in these pages: his symphonic imagination... 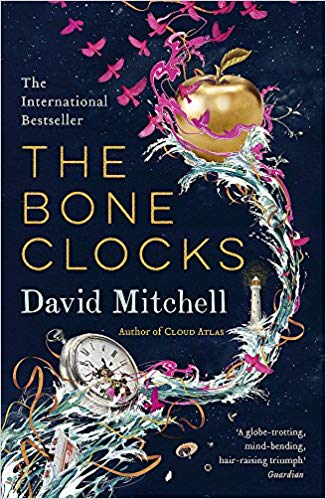