The spectacular new novel from the bestselling author of Cloud Atlas and The Bone Clocks, 'one of the most brilliantly inventive writers of this, or any country' (The Independent).​﻿

Utopia Avenue﻿ are the strangest British band you've never heard of. Emerging from London's psychedelic scene in 1967 and fronted by folksinger Elf Holloway, guitar demigod Jasper de Zoet and blues bassist Dean Moss, Utopia Avenue released only two LPs during its brief and blazing journey from the clubs of Soho and draughty ballrooms to Top of the Pops and the cusp of chart success, to glory in Amsterdam, prison in Rome and a fateful American fortnight in the autumn of 1968.​

David Mitchell's new novel tells the unexpurgated story of Utopia Avenue; of riots in the streets and revolutions in the head; of drugs, thugs, madness, love, sex, death, art; of the families we choose and the ones we don't; of fame's Faustian pact and stardom's wobbly ladder. Can we change the world in turbulent times, or does the world change us? Utopia means 'nowhere' but could a shinier world be within grasp, if only we had a map?

Noted novelist Mitchell returns with a gritty, richly detailed fable from rock's golden age … Bone spurs and all, it's realistic indeed and just the thing for pop music fans of a bygone era that's still very much with us.

As an old rocker, I have to say I fucking loved David Mitchell's new novel, UTOPIA AVENUE, about the flowering of British rock and roll in the mid- to late-60s. It's a hit on my Billboard list.

It’s a great book! I was completely engrossed for two days…

David Mitchell’s portrait of Swinging London is so vivid that his novel feels like time travel.

It is a supremely readable novel, if the quality of readability is taken to be one which is difficult to achieve and a relief to encounter. 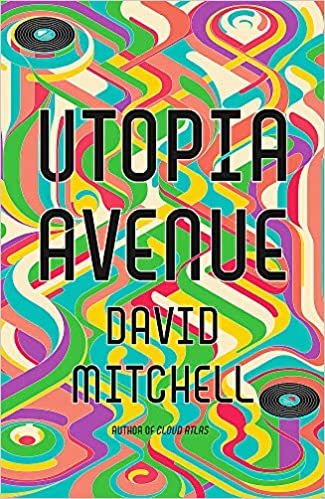