UK & Comm → Simon & Schuster
Don McRae grew up in a South Africa where his father would call the black men he met 'boy' and where his mother insisted that their black servants used tin mugs, plates and cutlery as they ate the family's left-over food in the backyard of their grand suburban property. The McRaes, like so many white people, seemed oblivious to the violent injustices of apartheid.

As the author grew up, the political differences between father and son widened and when Don refused to join up for National Service, risking imprisonment or exile overseas, the two were torn apart.

It wasn't until years later that the author discovered that the father with whom he had fought so bitterly had later in his life transformed himself into a political hero. Risking everything one dark and rainy night Ian McRae travelled secretly into the black township of Soweto to meet members of Nelson Mandela's then banned African National Congress to discuss ways to bring power to black South Africa. He had no political ambitions; he was just a man trying to replace the worst in himself with something better.

Under Our Skin is a memoir of these tumultuous years in South Africa's history, as told through the author's family story. It offers an intimate and penetrating perspective on life under apartheid, and tells a story of courage and fear, hope and desolation and love and pain, especially between a father and his son.
Rights

Melissa Pimentel manages the translation rights for Under Our Skin

Media
Reviews
A rich dual memoir depicts the dramatic generational changes in apartheid-era South Africa
A gripping read through which electricity continuously seems to flow. Gillian Slovo
The Times Full Review
As Donald McRae’s sonorous memoir suggests, it was not only black people who were dehumanised by apartheid. Indeed, in the 23 years the author spent in South Africa, his affluent white family nearly ripped itself apart. Under Our Skin is a remarkable account of the McRaes’ struggles against not only the government, but one another.
Ed Caesar
The Sunday Times Full Review 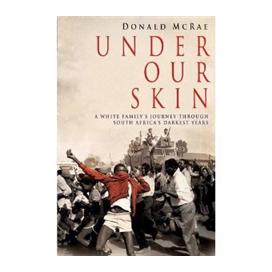