The Forty Rules of Love

An American housewife is transformed by an intriguing manuscript about the Sufi mystic poet Rumi.

In this lyrical, exuberant new novel, acclaimed Turkish author Elif Shafak unfolds two parallel narratives- one contemporary and the other set in the thirteenth century, when the Sufi poet and mystic Rumi encountered his spiritual mentor, the infamous wandering dervish known as Shams of Tabriz. Both stories together incarnate Rumi's timeless message of love.

American housewife Ella Rubenstein is forty years old and unhappily married when she takes a job as a reader for a literary agent. Her first assignment is to read and report on a work of fiction Sweet Blasphemy, by a man named Aziz Zahara. Zahara's novel, which is told in many different voices, tells of Shams's search for Rumi and the dervish's role in transforming the successful but unhappy cleric in a committed mystic, passionate poet, and advocate of love. In the age of deeply embedded bigotries and clashes, Rumi dared to break free of all conventional rules, to stand for a universal spirituality and an innver-oriented jihad, where the aim was to struggle against and prevail over one's ego. Not everyone welcomed these ideas, however, and the powerful spiritual bond between Rumi and Shams became the target of rumor, slander, and attack.

Becoming increasingly mesmerized by this tale, and growing more distant from her husband, Ella begins to question her protected, insular life and to reach out to Aziz, who lives in Amsterdam. She is also taken with Shams's lessons, or rules, which offer insight into an ancient philosophy based on the unity of all peoples and religions, and the presence of love in each and every one of us. As Ella reads on, she realizes that Rumi's story mir­rors her own and that Aziz-like Shams-has come to set her free, to transform her in a way she never could have imagined.

The Forty Rules of Love brings together East and West, past and present, to provide a compelling, dramatic, and exuberant account of how love works in the world.
Rights

As Turkey’s bestselling female writer, Shafak is a brave champion of cosmopolitanism, a sophisticated feminist, and an ambitious novelist who infuses her magical-realist fiction with big, important ideas... Her new novel seems, in part, an effort to imagine an Islamic past that is consonant with contemporary values.

In this appealing fable, Turkish author Elif Shafak toggles between characters from different times: a modern American housewife and a thirteenth-century poet…The universal theme is the struggle between the rational mind and the aching heart. Shafak’s heroine yields to the latter and never looks back.

With its timely, thought-provoking message, The Forty Rules of Love deserves to be a global publishing phenomenon...

In her poetic new novel, Elif Shafak captures two parallel journeys towards Love – one set in modern times and another in the thirteenth-century, between Sufi masters Rumi and Shams of Tabriz. The intersection between these two narratives reveals important lessons about self, selflessness, and Divine submission.

Even in her rare moments of being two-dimensional, Elif Shafak preserves a penchant to confuse. Her characters spend their time popping out of categories. They change their country, their name, their politics, their sex, and in one of her earlier novels, even their century. Nothing is quite as solid as it appears to be. Andrew Finkel

A seductive, shrewd, and affecting novel. Donna Seaman
Booklist (starred review) Full Review
A rare novel that succeeds in illuminating the mystical aspects of daily existence, novel of intelligence as well as heart, with wisdom that infuses every page. Roland Merullo, author of A Little Love Story and Breakfast with Buddha
Full Review
The Forty Rules of Love is a wise, joyous page-turner... and one that speaks urgently to our war-ravaged times. Thrity Umrigar, author of The Space Between Us

How can I love well? With The Forty Rules of Love, you can pour out your heart, break out of your stuck places, mysteriously fall in love, and find the deep joy of freedom. Jack Kornfield, author of The Wise Heart: A Guide to the Universal Teachings of Buddhist Psychology

A novel that crosses the bound of time, culture and belief. Jessamyn Ayers
I|AM Modern

This novel, a best seller in Turkey, may appeal to fans of Nicholas Sparks or Robert James Waller.

Shafak should have dropped Ella's story, with its preachy spiritual ruminations, and stuck to Rumi's odyssey, which opens a window into a world Westerners know little about."

A gorgeous, jeweled, luxurious book... the past and present fit together beautifully in a passionate defence of passion itself. 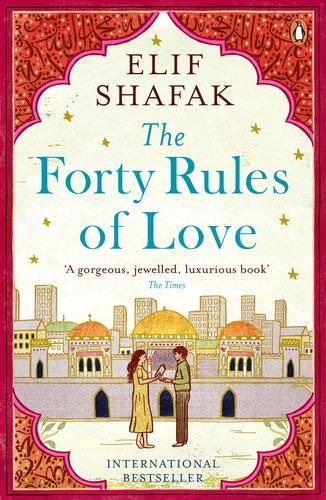