The Saint of Incipient Insanities

The Saint of Incipient Insanities is the comic and heartbreaking story of a group of twenty-something friends, and their never-ending quest for fulfillment.

Omer, Abed and Piyu are roommates, foreigners all recently arrived in the United States. Omer, from Istanbul, is a Ph.D. student in political science who adapts quickly to his new home, and falls in love with the bisexual, suicidal, intellectual chocolate maker Gail. Gail is American yet feels utterly displaced in her homeland and moves from one obsession to another in an effort to find solid ground. Abed pursues a degree in biotechnology, worries about Omer’s unruly ways, his mother’s unexpected visit, and stereotypes of Arabs in America; he struggles to maintain a connection with his girlfriend back home in Morocco. Piyu is a Spaniard, who is studying to be a dentist in spite of his fear of sharp objects, and is baffled by the many relatives of his Mexican-American girlfriend, Algre, and in many ways by Algre herself.

Keenly insightful and sharply humorous, The Saint of Incipient Insanities is a vibrant exploration of love, friendship, culture, nationality, exile and belonging.

Bulgarian
World
Egmont Bulgaria Publishing House
Dutch
World
Uitgeverij De Geus
German
World
Eichborn Verlag
Romanian
World
Editura Polirom
Media
Reviews
Even in her rare moments of being two-dimensional, Elif Shafak preserves a penchant to confuse. Her characters spend their time popping out of categories. They change their country, their name, their politics, their sex, and in one of her earlier novels, even their century. Nothing is quite as solid as it appears to be. Andrew Finkel

Ms Shafak has woven a tragi-comic tapestry of quirky and lovable 20-somethings struggling to find themselves in America. The Economist

Elif Shafak offers us an indelibly haunting portrait of contemporary America, in all its sexual/ethno/religious contortions... her novel is a bittersweet delight to read. Fernanda Eberstadt

Mixing humor and tragedy as effortlessly as her two unforgettable families blend and jumble up the many layers of their identity, Elif Shafak offers up an extravagant tale of Istanbul and Arizona, food and remorse, mysticism and tattoos, human comedy and, yes, massacres. Quite an exceptional literary feast

Ariel Dorfman
Author of Widows and Death and the Maiden

A work replete with dazzling wordplay, an infatuation with pop culture, and a fearless intellect, The Saint of Incipient Insanities marks Elif Shafak as a compellingly original voice in 21st Century fiction. 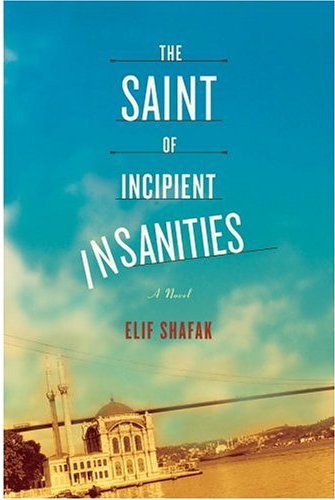