UK & Comm → Hodder (Ed. Nick Sayers)
It was a dirty job in a dirty war. Danny Curnow, known in the Army family as ‘Desperate Dan’ and in the secret files by his code name ‘Vagabond’, ran agents and informers - people blackmailed into betraying their own communities - in the years of conflict in Northern Ireland.

A high-stakes game, but a long time ago - before Danny quit, before the peace process. Now he lives quietly, working as a guide to the monuments and cemeteries of another, simpler war, on the D-Day beaches of Normandy.

Until the call comes from his old boss, Bentinick.
Not everyone in Northern Ireland has given up on violence. MI5 are planning a sting to destroy a resurgent terrorist cell and only Danny can make it work.

Soon, Danny and ambitious young Gaby Davies of MI5 are heading for Prague, where freelance double-agent Ralph Exton is leading Brendan Murphy on a mission to buy arms from Ralph’s Russian contact Timofey.

The covert world of deception and betrayal nearly destroyed Danny the first time. Fifteen years later, it hasn’t got any easier.

Vagabond shows Gerald Seymour writing at the top of his powers, and returning to the territory of some of his greatest bestsellers, Harry’s Game, The Journeyman Tailor and Field of Blood.
Rights 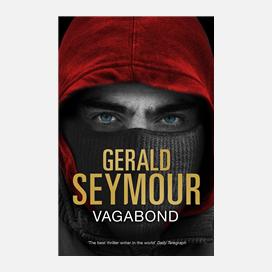