Through letters and journals, The Chilbury Ladies' Choir unfolds the struggles, affairs, deceptions, and triumphs of a village choir during World War II

As England becomes enmeshed in the early days of World War II and the men are away fighting, the women of Chilbury village forge an uncommon bond. They defy the Vicar’s stuffy edict to close the choir and instead “carry on singing,” resurrecting themselves as the Chilbury Ladies’ Choir. We come to know the home-front struggles of five unforgettable choir members: a timid widow devastated when her only son goes to fight; the older daughter of a local scion drawn to a mysterious artist; her younger sister pining over an impossible crush; a Jewish refugee from Czechoslovakia hiding a family secret; and a conniving midwife plotting to outrun her seedy past.

An enchanting ensemble story that shuttles from village intrigue to romance to the heartbreaking matters of life and death, Jennifer Ryan’s debut novel thrillingly illuminates the true strength of the women on the home front in a village of indomitable spirit.

Lyrical, poetic, emotional, funny, endearing, surprising – it is a masterpiece.

There's so much happening in Chilbury: intrigue, romance and an unforgettable cast of characters who aren’t always as they appear. The Chilbury Ladies' Choir is a charming slice of English wartime life that warms the soul like a hot toddy.

I am completely and utterly in love with this book. What a joy! It may be in my all-time top five - I just adore every single thing about it.

Jill Mansell, author of 'You and Me, Always'

Alexandra Brown, author of 'Not Just for Christmas'

A delightful and oh-so-authentic evocation of village
life during the last war, with endearing characters and an intriguing storyline, which I found very hard to put down. It manages to be sad and funny,  exciting and heart-warming, all at the same time. Quite an  achievement.

The Chilbury Ladies' Choir sinks you deep inside the rich, intricate atmosphere of an English village in the middle of war, when quiet lives are upended and secrets unravel. With her unforgettable characters and vivid narrative, Jennifer Ryan creates the kind of wartime novel that plays out over the intimate territory of the human heart—full of soul, full of hope. You’ll be thinking about this book long after the last page turns.

Beatriz Williams, author of 'A Hundred Summers' and 'The Secret Life of Violet Grant'

World War II in an English village seen through the eyes of the most delicious cast of characters you’ll ever meet—The Chilbury Ladies' Choir is a masterpiece of secrets, misdirection, village gossip, and gleeful disregard for anything but the main chance, as the Home Front learns to carry on. Seldom do you find a writer with such a deft touch—Jennifer Ryan sweeps the reader along to the very last page in a remarkable debut.

Jennifer Ryan’s charming debut interweaves many women’s voices to create a strong chorus that rings out with heart and the celebration of life… Fans of The Guernsey Literary and Potato Peel Pie Society and the TV series Home Fires should put this uplifting, absorbing novel high on their reading lists.

Ryan’s enchanting novel about the women of a small English village celebrates sisterhood and community while also bravely tackling weighty issues such as war and women’s rights. The characters’ experiences are artfully expressed through varied points of view via letters and journal entries, and the women’s stories of growth and change reflect their inner strength as they’re faced with the harsh realities of wartime life. With unforgettable tales of love, intrigue and tragedy, Ryan beautifully represents the indomitable spirit of Chilbury’s women in this sweet, emotional read
Barbara Pizio
RT Book Reviews

This atmospheric debut, based on the author's own family history, had me sniffing copiously.

Courageous or fearful, loving or cunning, their voices build a wonderfully idiosyncratic and gripping picture of a small community which will be turned upside down by the encroaching war.

Wonderfully warm...a life-affirming tale of the power of community spirit 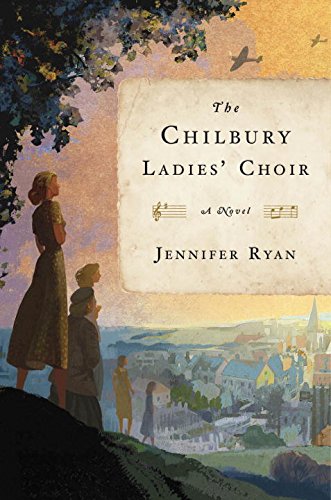