My Night with Reg

View PDF
theatre
Role Eric
Director Roger Michell
Royal Court/Criterion
My Night With Reg is Roger Michell’s 1994 production of Kevin Elyot’s gay drama. It follows a group of gay friends over several years as they all deal with the repercussions of their ‘night with Reg’, a promiscuous and deceptive young man. 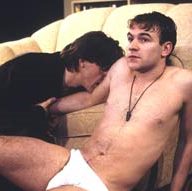