View PDF
theatre
Role John Merrick
Director Ellie Jones
Sheffield Crucible
The Elephant Man is the true story of John Merrick, hideously deformed by an unknown disorder who becomes the darling of the Victorian glitterati after his rescue from a freak show.

Joe Duttine played the title role of John Merrick in Ellie Jones’s production at The Sheffield Lyceum.
Media
Reviews
But this is Joe Duttine's evening for recreating Merrick's gentle and disarming manner when fate has dealt him such terrible and painful disability. His performance is truly charming. Lizzie Loveridge
Curtain Up
Ellie Jones's fine looking production works wonderfully well in its moments of intimacy, with Joe Duttine outstanding in the title role Mike Woodcock
BBC - Sheffield and South Yorkshire 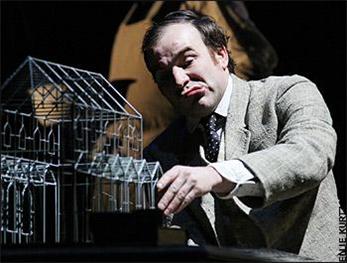