Armchair Nation: An Intimate History of Britain in Front of the TV

World → Profile Books (Ed. Daniel Crewe)
But what does your furniture point at?' asks the character Joey in the sitcom Friends on hearing an acquaintance has no TV.

It's a good question: since its beginnings during WW2, television has assumed a central role in our houses and our lives, just as satellite dishes and aerials have become features of urban skylines. Television (or 'the idiot's lantern', depending on your feelings about it) has created controversy, brought coronations and World Cups into living rooms, allowed us access to 24hr news and media and provided a thousand conversation starters.

As shows come and go in popularity, the history of television shows us how our society has changed. Armchair Nation reveals the fascinating, lyrical and sometimes surprising history of telly, from the first demonstration of television by John Logie Baird (in Selfridges) to the fear and excitement that greeted its arrival in households (some viewers worried it might control their thoughts), the controversies of Mary Whitehouse's 'Clean Up TV' campaign and what JG Ballard thought about Big Brother.

Via trips down memory lane with Morecambe and Wise, Richard Dimbleby, David Frost, Blue Peter and Coronation Street, you can flick between fascinating nuggets from the strange side of TV: what happened after a chimpanzee called 'Fred J. Muggs' interrupted American footage of the Queen's wedding, and why aliens might be tuning in to The Benny Hill Show.

As Alfred Hitchcock said: 'The invention of television can be compared to the introduction of indoor plumbing. Fundamentally it brought no change in the public's habits. It simply eliminated the necessity of leaving the house.'

Norah Perkins manages the translation rights for Armchair Nation: An Intimate History of Britain in Front of the TV

Media
Reviews
One of the most entertaining things about the book – and there are many – is finding out how many of the things we think we know about television are either myths, or simply hogwash ... As well as being consistently perceptive in his observations, Moran has done something I would confidently have thought impossible – he’s made the history of British TV as dramatic as it is fun. John Preston
Sunday Telegraph, five-star review
Joe Moran is a wonderfully gifted social historian, with a ravenous capacity for research ... He is particularly good at overturning the bogus collective memories to which television so often gives rise ... His sources from diaries and memoirs are rich and varied ... Armchair Nation offers rich pickings for those, like me, who struggle to remember (everything we've watched). Craig Brown
Mail on Sunday, four-star review
In its insights, clarity and honest wit, it's hard to imagine a more engaging book on a subject everyone already thinks they know about. As in the best TV itself, you find yourself learning something new with almost no effort. Observer

[A] formidable historical analysis of the gogglebox . . . Moran is particularly adept at revealing the paradoxes of a medium that can facilitate communal activity while also facilitating urban anomie [and] the latter comprise some of its most poignant passages. A lonely retired widow writes: "At a flick of the switch one's room can be peopled." Again and again, we encounter the tension between the shared cultural experience that TV offers, and the separation it sometimes confirms . . . Moran's achievement is remarkable given the breadth of subject matter.
The Independent 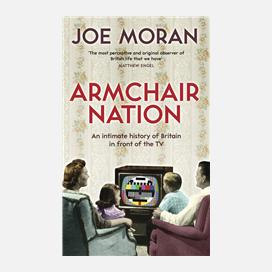