The Sunshine Boys looks back at the life of two vaudeville stars: comedy kings Willie Clark and Al Lewis. Once a fantastic duo, the two have since been locked in a feud for years but are back on TV for a one-off show to remember the old days.

The Sunshine Boys opened to glowing reviews on the 17th of May 2012 and runs at The Savoy Theatre until the 28th of July.
Media
Reviews
And Johnnie Fiori produces a polished and confident performance as the nurse, handling the belligerent Willie like a naughty schoolboy. Peter Brown
LondonTheatre.co.uk
Minor characters rarely come off well in Simon's plays, and the nurse who looks after Willie isn't even given a name. Hers is not a role, it's a job, so hats off to Johnnie Fiori for giving her buoyant life. David Benedict
Variety
A stand-out cameo by the wonderful Johnnie Fiori, the only actor who's really a match for DeVito here.
Time Out
Thea Sharrock directs a pitch-perfect production that beautifully captures fleeting moments of tenderness in the comedy without ever turning mushy. And the supporting roles are all excellently played, while rightly allowing the limelight to fall on DeVito and Griffiths. This is a golden evening that finds the West End at the top of its game. **** Charles Spencer
The Telegraph
The end result is a richly resonant comedy that reminds us that, while Simon may be pure, he is rarely simple. Michael Billington
Guardian
...enlivened by a crisp and snapping appearance by Johnnie Fiori. Susannah Clapp
The Observer 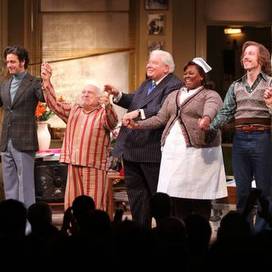