It follows King Henry’s struggle to hold onto power as his kingdom explodes into violent conflict during the War of the Roses.

Jonathan Slinger played Richard, the son of the Duke of York and future monarch, in the production.
Media 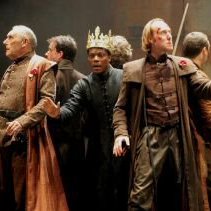