Directed by Michael Boyd, artistic director of the RSC, Jonathan’s Macbeth is a peroxide blonde who slips easily in the psychopathic mould as the play progresses.
Media
Reviews
The best main stage RSC Macbeth since Jonathan Pryce’s...Jonathan Slinger is a sly, edgy and psychotic Macbeth." Michael Coveney
The Stage
Jonathan Slinger oozes menace. This is strongest when he smiles; his grin is chillingly empty. Henry Hitchings
The Evening Standard
A berserk, snickering slaughterer who is prey to nightmarish fantasies: most sensationally when he imagines Banquo's ghost slitting his throat. Michael Billington
The Guardian
Once Slinger gets going with the serial killing he is horribly compelling. Charles Spencer
The Telegraph 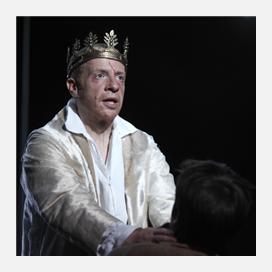