Jonathan's Richard II, played alongside his own Richard III as part of the RSC's much-praised Histories Cycle, was a fey creature, powdered and periwigged to look like a porcelain doll.

With the whole of Michael Boyd's massive undertaking receiving plaudits, Jonathan's double Gloucesters were deemed a particular highlight. The Histories began life in Stratford in 2007 before playing in London at the Camden Roundhouse in 2008.

Media
Reviews
Slinger boldly revives the tradition of a man more queen than King. John Thaxter
The Stage
In a mop of red Shirley Temple ringlets, Jonathan Slinger's Richard, prancing, pouting and delivering silky insults like Cecil Beaton at a Mayfair cocktail party. Rhoda Koenig
The Independent
Slinger's Richard starts out as a camp autocrat in a curly red wig that gives him a disconcerting resemblance to Harpo Marx. But what Slinger brings out is Richard's secession of power to Bolingbroke through a mixture of guilt, grief and frivolity. Michael Billington
The Guardian
Slinger is too good to present the king purely as an effeminate mannequin. There’s steel behind the make-up Maxwell Cooter
whatsonstage.com 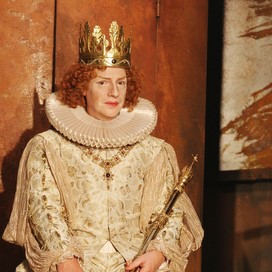