Jonathan Slinger's Richard the Bastard was lauded as one of the theatrical highlights of the last decade. Directed by Michael Boyd, it played first in Stratford and later at the Roundhouse in Camden as part of the RSC Histories Cycle.

Jonathan's Richard, which drew comparisons with some of the finest classical actors to have played the role, was pasty of pallour and notable for an enormous birthmark on the side of his head.

Media
Reviews
An unsparing portrait of nihilistic solitude. Michael Billington
The Guardian
Jonathan Slinger, hardly a name to conjure with until now, proves a worthy and highly individual successor to such recent famous Richards as Antony Sher, Robert Lindsay and Simon Russell Beale...There is no mistaking the charisma of the central performance. Charles Spencer
The Telegraph
Jonathan Slinger’s Richard is a small masterpiece. Peta David
The Stage

This week Mr Slinger did not just take the lead role of Richard. He allowed it to enter his very being so that his pale, imperfect body twitches like some possessed Caribbean zombie.

In a performance that is at times disgusting to watch (yet gripping), the shaven-headed Mr Slinger's body convulses with the ecstasy of the evil his character is committing. Occasionally he jumps high in the air, like Sir Mick Jagger celebrating a final chord. This is an amazing performance. 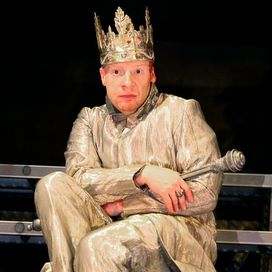