World → Quercus
Eric Pizer can just about keep his two lives going: weekends in the country with his wife, Bunty, getting sympathy he doesn't deserve; Mondays to Fridays in London with his pretend job, a house full of misfit tenants, and a girlfriend with secrets of her own. But when one sunny morning Eric is hit by a bus and breaks his leg, this on top of the threatening phone calls from a man called Slingsby, Eric suspects that things are about to become very complicated indeed. Joseph Connolly's novel is a tour through the disintegrating world of inveterate liar and accident-prone Eric.

Along the way we meet a cast of hilarious characters: the wild and angry Fiona, always bumping in to things; Henry Vole, one of the tenants, addicted to tea, Hobnobs - addicted to Fiona; a couple of decorators who seem to be systematically demolishing Eric's house; and of course the blackmailer Slingsby (Eric thinks he knew the Krays).
Rights

Melissa Pimentel manages the translation rights for This is It 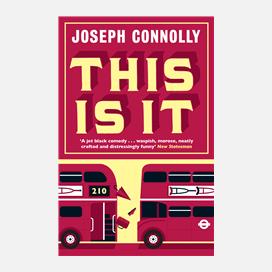