View PDF
theatre
Role Rosaline
Director Trevor Nunn
National Theatre
Love’s Labour’s Lost is Sir Trevor Nunn’s First World War-set reimagining of Shakespeare’s comedy. It tells the story of Ferdinand, King of Navarre, and his three noble companions as their three year vow of celibacy is sorely tested by the arrival of the beautiful Princess of France and her companions.

Kate plays Rosaline, one of the ladies attending on the Princess of France, in the production.
Media 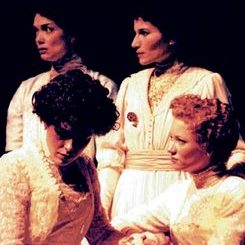