Kate's ferocious and sexual Lady Macbeth won wide critical acclaim and was nominated for a Tony Award.
Media
Reviews
[Stewart] is superbly partnered by Kate Fleetwood's Lady M, whose capacity to imagine dashing out her child's brains is an index of a deeply disturbed mind. Michael Billington
The Guardian
At the start there is no doubt that Kate Fleetwood's Lady Macbeth, a sexy, raven-haired siren, seductively luring her husband on to murder, is the real power in the marriage. Charles Spencer
The Telegraph
The Macbeth of a lifetime. Nicholas de Jongh
Evening Standard
Her scenes with Mr. Stewart, which chart the couple’s progress from irresistible mutual attraction to repulsion, are stunners. Ben Brantley
New York Times 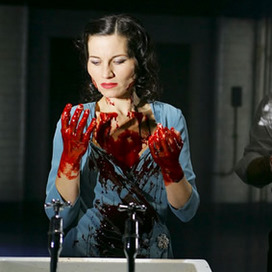