View PDF
theatre
Role Commander
Producer Sound & Fury/FUEL Director Tom Espiner, Mark Espiner & Dan Jones
Young Vic/Drill Hall, Edinburgh/National Tour
A submarine is on patrol in the arctic. The crew sleep, eat, drill, long for word from home, and silently shadow their target. Their lives, at once extraordinary and mundane, are shattered by a global crisis from which uniquely personal stories emerge.

Sound&Fury's immersive production of Bryony Lavery's text set its audience within the bowels of the submarine, sharing the space with the cast.

Laurence played the vessel's commander, who faced a series of massive dilemmas as his sub stumbled across the doomed Russian submarine Kursk.
Media
Reviews
If you didn’t manage to immerse yourself in the captivating underwater world of Kursk on its first outing at the Young Vic last summer, grab this second chance now. Fiona Mountford
Evening Standard
Laurence Mitchell [is] marvellously stoic and quietly desperate. Fiona Mountford
Evening Standard
Intensely moving. Michael Coveney
The Independent 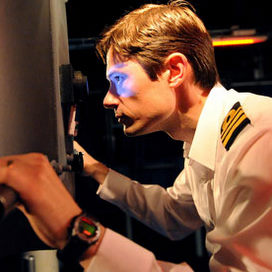