View PDF
theatre
Role Philip/Malcolm/Neil
Director Sarah Frankcom
Royal Exchange
Winterlong won the Bruntswood Prize in 2011, a national playwriting competition run in conjunction with the Royal Exchange Theatre in Manchester, where it had its premiere before transferring to the Soho Theatre.

A bleak and warped vision of contemporary society, Winterlong is one of the most strident pieces of new writing to emerge in recent years.

Laurence played various roles that posed some dark threat to Oscar, a feral and naive child abandoned by his mother as an infant.
Media
Reviews
Laurence Mitchell, who plays several roles as well as his mentally unbalanced father, is totally convincing. Natalie Anglesey
Manchester Evening News 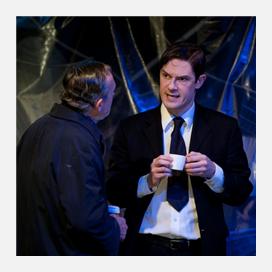