The Space Brigade: Book 2, The Shocking Trouble on the Planet of Shobble

ANZ → Pan Macmillan
US → Grosset & Dunlap
The Space Brigade are relaxing after their spectacular triumph over Princess Petronella and her evil plans to destroy Earth, when they receive an intriguing letter. The planet of Shobble wants to employ their services. Should they accept this new mission? After all, the letter mentions grave danger. On the other hand, the people of Shobble are apparently the nicest in the galaxy. As leader of the Brigade, Nicola Berry puts it to the vote and the decision is made. It's time to unpack the spaceship for another intergalactic adventure!

When the Space Brigade land on the planet of Shobble they soon discover this beautiful planet has a dark secret. Most of the population are virtually slaves, forced to mine for marshmallow and drill for chocolate (the ingredients of Shobble-Choc, the most divine chocolate in the galaxy). Led by a teenage girl called Topaz, the workers are beginning to rebel. The commander-in-chief wants the Space Brigade to squash the rebellion.

At first Nicola refuses to be involved but then something shocking happens that leaves her with no choice. Now the Space Brigade are on an incredible journey that will take them across infested rivers, snowy swamplands and frozen seas. Along the way they'll learn new skills, make new friends – and they might just change this planet's history forever.
Rights

Roxane Edouard manages the translation rights for The Space Brigade: Book 2, The Shocking Trouble on the Planet of Shobble 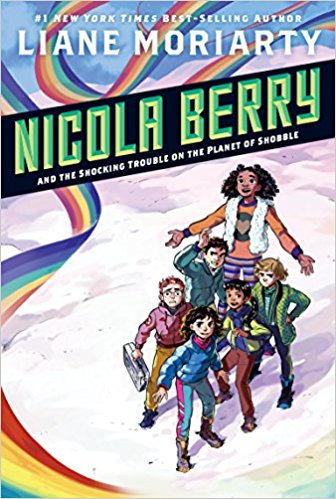