World → Stripes Publishing
What's black and white, and flies faster than the speed of light? The Space Penguins! They're the ice-cool crew of the spaceship Tunafish. With their pioneering flying skills and resistance to the deep freeze, these intergalactic avians are going where no fin has gone before. Captain T Krill, Rocky Waddle, Fuzz Allgrin and Splash Gordon are on a mission to explore new planets, rescue alien life, and battle their former comrade-in-wings: Darth Wader.

When the crew of the Tunafish pick up a distress signal from a cargo craft, there's snow time to lose. But the Tunafish's daring rescue is canned when the vessel runs into trouble too. What's been luring spacecraft to their doom?
Media 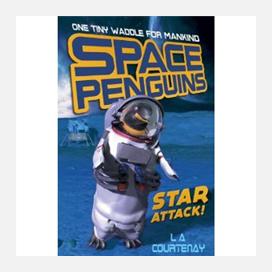