View PDF
theatre
Role Polonius
Director Ian Rickson
Young Vic
Ian Rickson sets his eagerly-anticipated production of Hamlet in a modern day psychiatric hospital, with Michael Sheen in the title role as a disturbed in-patient. ‘Elsinore’ is the secure wing of the hospital and Michael’s Polonius is a chief doctor on the ward.
Media
Reviews
Michael Gould impresses as the pedantic courtier Polonius, here a Dictaphone-wielding psychiatric ex-pert. Henry Hitchings
The Evening Standard
There are great turns...from Michael Gould as a Polonius like an officious janitor elevated to second-in-command. Matt Trueman
Carousel of Fantasies 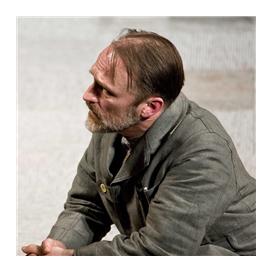