Things I Didn't Expect (When I Was Expecting)

ANZ → Melbourne University Press
‘This isn't just a book for every woman who's ever had a baby, but any reader who has a pulse…Fist-bumpingly smart and spleen-damagingly funny, Monica Dux is our answer to Caitlin Moran’ Benjamin Law

Pregnancy is natural, healthy and fun, right? Sure it is, if you’re lucky. For others, it’s an adventure in physical discomfort, unachievable ideals, kooky classes and meddling experts. When Monica Dux found herself pregnant with her first child, she was dismayed to find she belonged firmly in the second category. For her, pregnancy could only be described as a medium-level catastrophe. So, three years later and about to birth her second child, Monica went on a quest: to figure out what’s really going on when we incubate. Things I Didn’t Expect is one woman’s journey to make sense of the absurdities, the harsh realities, the myths and the downright lies about making babies. Monica explores the aspects of baby-making that we all want to talk about, but which are too embarrassing, unsettling or downright confronting. She also looks at the powerful forces that shape women’s experiences of being pregnant in the west, the exploitative industries, and the medical and physical realities behind it all. Along the way, she fends off sadistic maternal health nurses, attempts to expand then contract her vagina, and struggles to keep her baby’s placenta off her hippy brother’s lunch menu. 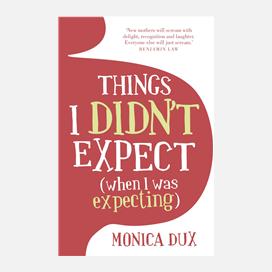