The Sweet Smell of Decay

The Sweet Smell of Decay is the first in a magnificent new series of historical crime novels set in 17th century Restoration London featuring the loveable rogue Harry Lytle. He’s just discovered he has a young cousin, Anne Giles. But he’s had the pleasure of meeting her for the first time as a corpse – mutilated and laid out on the slab for an autopsy. His father has tasked him with job of tracking down Anne’s murderer.

Harry has some robust assistance from one David Dowling, a resourceful and impressively well-built, but equally hygiene-deficient, butcher. Together they follow a trail of blood, conspiracy and corruption that takes them to the dark and murky corners of Restoration London, featuring a great cast of ne’er-do-wells, cheeky wenches, harmless witches, likeable villains, and not a few unsavoury fellows keen on sending Lytle and his companion to an early grave
Rights

Media
Reviews
Susanna Gregory and Andrew Pepper fans will find a lot to like in this historical thriller with its convincing Restoration England setting.

Publishers Weekly Full Review
Paul Lawrence, is so skilled with his writing that we can almost smell the decay of 1664. 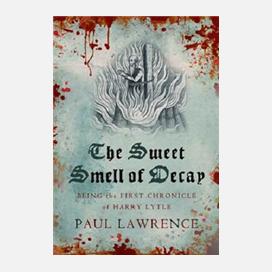