Few Australian writers have delved as deeply as Goldsworthy into the mysterious state of being that is childhood. Now he's applied his fascination with that stage of life to his own, from his bizarre first memories to the embarrassments of adolescence.

For all his working life Goldsworthy has been both doctor and writer – not for nothing is he hailed as Australia's Chekhov – and his memoir is a rare insight to a mind charmed equally by literature and science, the rational and the imagined. The small country towns he grew up in gave free rein to the young Peter's intense curiosity, and in the fifties and sixties he ran amok in hilarious fashion. A boy with a mind wide open to the universe but closed to self-knowledge, he came of age with a naive self-confidence that was ripe for the bursting.

Comically self-deprecating, unrestrained in its honesty, His Stupid Boyhood is a passport to the lost country of youth, and a beautiful homage to childhood in general.

Kate Cooper manages the translation rights for His Stupid Boyhood

Media
Reviews
Peter Goldsworthy's delightful memoirs...shows us where it all comes from. Clive James
Full Review 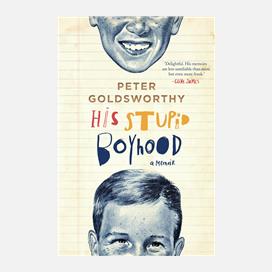