A View From A Hill

Producer Pier Wilkie Director Luke Watson Starring
Production Company BBC Productions
Broadcaster BBC4
How different Fanshawe's holiday might have been had his trusty binoculars not broken. His friend the Squire's archaic pair prove strangely bewitching, but is everything they see to be believed? And why does their very mention fill the elderly butler with dread? He looks like he's seen a ghost, or worse.

Perhaps Fanshawe should have consulted the old man before venturing up Gallows Hill. Some stones are better left unturned, and questions of the dead should remain the secrets of the past, because sometimes the dead answer back...
Media 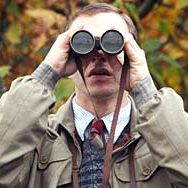