The Great Tax Robbery: How Britain became a Tax Haven for Fat Cats and Big Business

As we are assured that 'there are no alternatives' to severe cuts in public spending and that 'we are all in this together', Private Eye journalist and former tax-inspector Richard Brooks reveals the scandalous proliferation of tax avoidance among Britain's fat cats and how new measures from successive British governments actually make it easier.

From offshore companies in Luxembourg to deliberate exploitation of developing countries, Brooks shows how a host of High Street names - including Vodafone, Amazon, Barclays, Topshop, and Boots - legally pay almost no tax in Britain despite multibillion pound profits. Unpicking the loopholes and bonuses that bankers and top sports stars like Wayne Rooney use to legally reduce their tax burden, this is a shocking expose of how the richest deprive the state coffers of billions - leaving us to pick up the bill.

Media
Reviews
Brooks has helped to put the pressure on European governments to change the status quo and transform rhetoric into real reform.
The Times
A must read. Brooks exposes the financial immorality of the rich as never before. Prof. Richard Wilkison and Prof. Kate Pickett
Authors of The Spirit Level
Richard Brooks is a digger and a troublemaker who niggles away at difficult subjects in a meticulous, punchy and highly effective way. Alan Rusbridger
The Guardian
Required reading. Richard's contribution to the on-going debate on ensuring that everyone pays their fair share of tax has been immense. Margaret Hodge MP

Detailed and comprehensive whilst also being an enjoyable and wicked read, spiced with scurrilous examples of breath-taking cheating and greed. Michael Meacher, MP

A call to arms and a tour de force. Prof. Danny Dorling

Any crowd-pleasing book about tax... would pack its pages with skirmishes between the blood-sucking bureaucrats and the honest toiling folk. The Great Tax Robbery does something much more interesting... Brooks comes into his own: not only does he have a near-encyclopaedic knowledge of anomalies sanctioned by the state, he also has an ear for resonant detail . . . [a] fascinating book. Financial Times

[An] important new book... By combining case studies with an astute use of data and an examination of tax avoidance in an historical context, Brooks demonstrates that financial amorality is endemic among Britain's elite. The book's greatest success is exposing the complicity of the Government. The Times

[An] important new book... By combining case studies with an astute use of data and an examination of tax avoidance in an historical context, Brooks demonstrates that financial amorality is endemic among Britain's elite. The book's greatest success is exposing the complicity of the Government. The Times

Richard Brooks makes [the] case fluently with a mass of evidence, and an occasional dash of wit . . . an informed polemic about the way our world seems to have become more unfair as it has become richer.

Richard Brooks exposes the very British scandal in which WE are inflicted with austerity whilst corporations and wealthy individuals are permitted to cart their tax obligations to havens over which the UK government has far more influence than it pretends. Jon Snow
Channel 4
This year's indispensable book. Nick Cohen
Observer 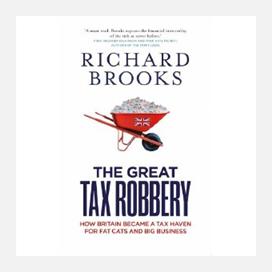