​
It is a morning at work, a performance of Macbeth, a snowy trek through the woods.

Or an eternity waiting for news. Or a countdown to something terrible.

Or it is infinite when describing the sacrifices we would make for those we love.

In rural Somerset in a middle of a blizzard, the unthinkable happens: a school is under siege. Told from the point of view of the people at the heart of it, from the wounded headmaster in the library, unable to help his trapped pupils and staff, to the sixteen-year-old Syrian refugee trying to rescue his little brother, to the police psychologist who must identify the gunmen, to the students taking refuge in the school theatre -- all experience the most intense hours of their lives, where evil and terror are met by courage, love and redemption.

Lupton tells her story with searing beauty and unbearable tension. Exquisite. Compassionate. Painful. Fantastic. A word of powerful imagination that wears its intelligence lightly. Absolutely terrifying and nail-biting. Don't read this if you want to be able to put it down.

Three Hours is Rosamund Lupton's best book yet, and that is high praise. A monster story for our fractious historical moment -- the age of the internet and of Columbine, of terror and mass migration -- when the monsters often look an awful lot like our own children. Chilling, suspenseful, humane, and brave.

Mind-blowing. It's so fast-paced and credible that at times I felt like I was watching rolling news coverage of a real incident where I knew the victims. I had that same pulse-racing, queasy feeling -- the same inability to look away. It's a horrifying story but told with such compassion and humanity. A large cast of characters and yet you feel genuinely emotionally engaged with each one. Amazing.

Three Hours has a voice all of its own. Character and plot leap out at you from the first line. Rosamund Lupton makes you race through the pages with her irresistible storytelling. Impossible to stop until you reach the poignant end!

I read Three Hours by Rosamund Lupton in two days, in awe. It's breathtaking. A modern rumination on the issues that divide 21st century life, a celebration of refugees, of mental health, of love and hope and bravery. I loved it more than I can say.

Gillian McAllister
author of Everything But The Truth

Three Hours is one of the best books I've read in years [...] It's the kind of story that makes your heart pound, palms sweat, mind race as it presses down on you and forces you to read it all in one great greedy gulp. And, yes, it made me cry a lot - with fear, grief, and overwhelming hope. Because, despite its subject matter, this is a hopeful book. And it will make you believe in the intrinsic goodness in people long before you reach the final page, too.

Wonderful, heart-aching, warm, terrifying. I stole every spare minute to read it.

Gytha Lodge
author of She Lies In Wait

Three Hours is a brilliant novel - moving, relevant and honest. Rosamund Lupton takes us through the story of a siege in an English school, building on the tension and our emotions as the story speeds to its conclusion. She handles difficult subjects with sensitivity and intelligence, focusing on the heroism of the individual. An exceptional and heartbreaking read.

Three Hours is a beautifully written, incredibly gripping story about a school held siege by gunmen. But this is not a bloodbath - it's drama that celebrates the resilience, courage and love of ordinary people caught in extraordinary circumstances ... I was entirely invested in the lives of every character as Lupton's layered storytelling is utterly compelling. I urge you to carve out three hours (or more) of your own time to read this in one sitting; you won't be able to put it down.

A smart thriller with plenty of twists and reveals

Based on every parent's nightmare ... The immediacy of Rosamund Lupton's writing is extraordinary; she shifts from character to character so that it takes time for the full horror of the situation to unfold. Gemma Whelan narrates flawlessly ... Three Hours is much more than a nail-biting thriller; it is a disquisition on values: of love and hate, of sacrifice for others, of risk-taking and courage, of community rather than self, of tolerance versus brainwashed extremism.

The Times 'Audiobook of the Week'

Three hours of intense, heart-stopping drama are stripped back and relayed from different perspectives in this thrilling novel ... This is a truly exceptional read.

The Times 'Thriller of the Year'

An incredible, unbelievably powerful book. The heart-stopping tension is so real it hurts, but it's the deeply moving courage that makes you cry. An utterly plausible, terrifying book that should come with a health warning: this will hurt your heart. I forgot how to breathe as it explored what it means to be human - for better or for worse. It's taut, it's tight, it's appalling, it's uplifting, it's extraordinary. Simply stunning.

Three Hours is one of the most exhilarating reading experiences I've ever had. Rosamund Lupton takes a dark, painful subject and turns it into a novel full of hope and compassion. An amazing achievement.

Unbearably tense and emotionally note-perfect, Three Hours is a first-rate thriller that reaches in through your throat and grabs hold of your heart and doesn't let go until the very last page.

This is an incredible novel: a heady combination of elegant writing, nuanced characterisation, deep emotion and heart-stopping tension. I was torn, all the way through, between wanting to slow down in order to relish the detail, and wanting to speed up in order to find out what was going to happen.

Elizabeth Brooks
author of Call of the Curlew

There's no one else writing quite like Rosamund Lupton in fiction today - the way she combines high tension thrillers with a compassionate and humane take on the world is unique. Three Hours is exceptional - at turns heartbreaking, warm, terrifying, perceptive and grippingly page-turning, this novel will have you up to the small hour desperate to find out the fate of a little school in the heart of rural England.

Kate Hamer
author of The Girl in the Red Coat

[Three Hours] manages to have the taut crispness of a thriller while also immersing the reader in the personalities of her characters.

It's a nightmarish premise that makes for a riveting thriller, but as Lupton switches between viewpoints, this sensitive novel also offers something else: an exploration of what binds us together.

In a crowded year, one of the highlights was Rosamund Lupton's Three Hours, a gripping depiction of a school shooting. No cheap thrills: this is a responsible, ultimately moving account of a distressing modern phenomenon.

A brave examination of goodness in the face of cruelty.

A Somerset school is under siege in this tensely emotional thriller, unfolding over the titular three hours: ordinary heroes are revealed, as teachers and pupils are tested by extraordinary events. A breathlessly involving read that is also a disquisition on community, love and self-sacrifice.

A moving and engrossing thriller.

Lupton's fourth novel is an extraordinary achievement and kept us on the edge of our seats from start to finish [...] if you're looking for a tense literary thriller, Three Hours is outstanding.

...the tension is at times extreme. But the most original and impressive aspect of the novel is its examination of goodness confronted with psychopathic brutality.

A flawlessly executed story that owes as much to theatre - the rotating ensemble cast, the echoes of Greek tragedy as well as Shakespeare - as it does to crime fiction. Too often in 'literary thrillers' either the genre element or the bookish content is merely gestural; here both part of the label are justified, and the balance is just right.

John Dugdale
The Sunday Times 'Thriller of the Month'

Lupton's characterisation reveals a profound understanding of the human spirit under intense pressure, as well as the teenage mind.

This novel's greatest strength is its moving depiction of the anguishes of parenthood and the wild possibilities of first love.

Three Hours intersperses scenes of breath-sucking
tension with stirring meditations on human nature...... Three Hours is immensely satisfying as an action-driven thriller, but its real resonance lies in exploring the mysteries of human consciousness, revealing how “you don’t know a person … including yourself … until the everyday is stripped away”.

In a read that’s not for the faint-hearted but is utterly brilliant, Rosamund Lupton explores a three-hour siege by a gunman in a snow-bound Somerset secondary school. Moving back and forth in time and from character to character and the politics that inspires hatred, this is an incredibly tense book that gets to the heart of violence, terror and the emotional impact of those caught up in events beyond their control. Written with real perception and beauty, Three Hours is set to be a breakout read for book groups and beyond in 2020.

... this is an urgent, heady hit of high-octane storytelling.

I hardly breathed as I raced through this thriller in which gunmen have laid siege to a school in rural Somerset. It’s the very definition of a page-turner … moving and thought-provoking

.... this is one of those novels you live rather than merely read.

An electrifying, pulse-racing novel about a school siege in Somerset

It is early days, but this could be one of the thrillers of the decade. Intense, horrifying and brilliantly told ... If you only read one thriller this year; make it this one: it is that good.

The drip-feed of information keeps the reader hooked and setting the story over three hours creates extraordinary tension that builds to a nerve-wracking crescendo. A gripping white-knuckle ride.

I literally could not put this book down until the final page. It's gob-smackingly, heart-stoppingly, breath-holdingly brilliant. The tension will blow your mind. Exceptional writing by Rosamund Lupton. This book is superb.

Wow! This is a stunner of a book [...] staggeringly good.

Jane Fallon
bestselling author of My Sweet Revenge, Faking Friends and Getting Rid of Matthew 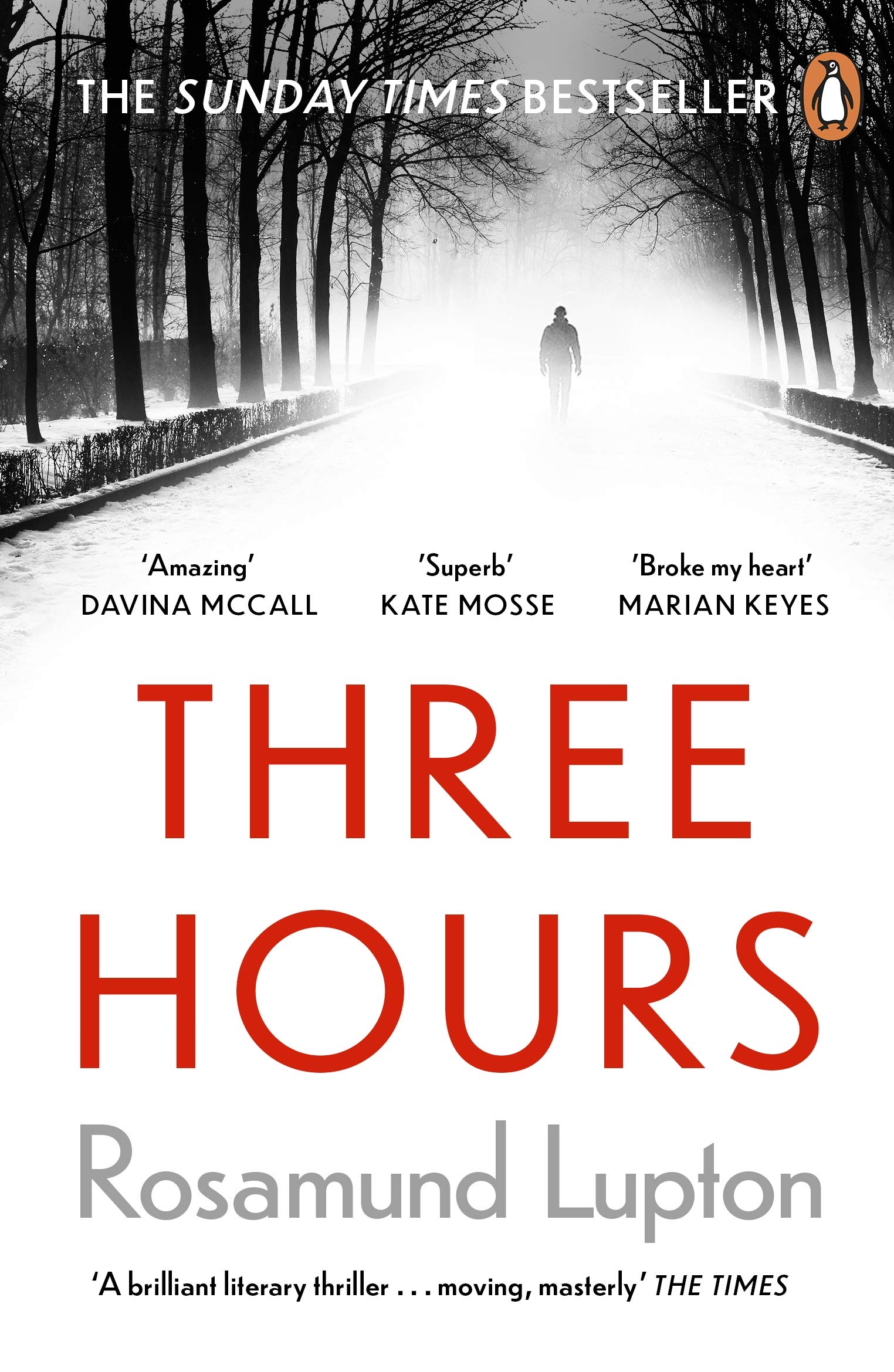