Last Voyage of the Valentina

An eccentric aristocrat is savagely murdered in his Italian palazzo at the end of World War Two.

Twenty years later, this unsolved crime touches the life of Alba, a hedonistic girl who lives on a houseboat in Sixties Chelsea.
Between these two distinctive times runs a thread of love, decadence and betrayal that takes Alba from the country houses of the shires to the olive groves of the Amalfi Coast, rich with the scent of figs, the drama of wartime and the lingering decay of tragedy.

The past unfolds revealing a secret web of partisans and Nazis, peasants and counts and in the centre of it all, an alluring woman of mystery: her mother.

Alba investigates not only a murder but the forbidden truth. What she finds in the past is heartrending, but it’s the gateway to her own future. 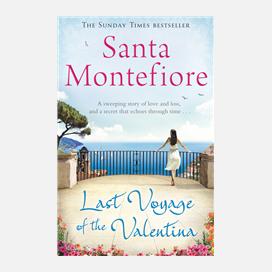