View PDF
theatre
Role Amy
Director Robin LeFevre
Donmar Warehouse
Hotel in Amsterdam is Robin LeFevre’s 2003 production of John Osbourne’s 1968 play. It follows six actor friends as they travel to the Dutch capital for a weekend of rest and relaxation away from their film director boss. However, as the drinks flow and the friends' inhibitions are lost, the fragility of the bonds between them gradually becomes apparent.
Selina Griffiths played Amy in the production. 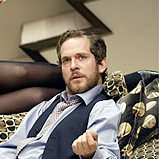