Memoirs of a Showgirl

ANZ → Hachette Australia
In Memoirs of a Showgirl Shay Stafford takes us on an armchair ride of her life from Brisbane schoolgirl to celebrated Paris showgirl. Pulling back the curtain on the fascinating world of Paris cabaret, Shay invites us backstage at the Moulin Rouge and Lido to discover what it’s really like to tread the boards of the world’s most famous cabarets in the world’s most romantic city.

Shay details the highs and lows, the loves and temptations and the close encounters with the rich and famous in this remarkable account of a most extraordinary life. In a publishing first, we are given a glimpse of the grind behind the glamour and learn that beyond its sparkling façade, not everything that glitters in the modern showgirl’s life is gold.

The rich history of the Moulin Rouge and Lido is recounted as is the cautionary tale of how a stunning city’s seedy underbelly routinely seduces vulnerable young ingénues. For, after twelve years at the Moulin Rouge and Lido, Shay has seen it all. Detailing her transformation from a single woman making the most of the extraordinary Parisienne nightlife to a happily married mother of two, Shay offers up a magical glimpse into another world from a down-to-earth and lovable Australian girl whose high kicks became the toast of Paris.

See Paris through Shay’s eyes. The view over the Seine from the back of a Vespa, the backstage dramas, the loneliness of a life far from home, the excitement of living your dream plus the high melodrama of French love affairs are all told in Shay’s wonderfully warm and honest voice. She brilliantly captures the journey from the ordinariness of Australian suburban life to the glittering highs of the Paris stage, as well as showcasing the grit and determination needed to carve a successful career in dancing.

Shay Stafford has lived a life many dream about, and this is her story.
Rights

Kate Cooper manages the translation rights for Memoirs of a Showgirl 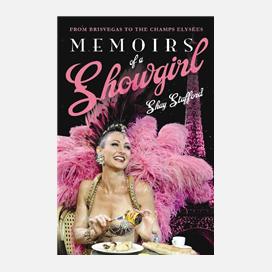