The sky was darkening quickly. There were no more shadows. Everything appeared stark, like staring into the bottom of a stream. Frank cleared his throat, as if about to say something, and she swung to face him, perhaps a little too quickly, in too much anticipation … ‘He’s got no bloody idea. No bloody sense.’

War ends and the world changes, as it always does. But hate is hard to extinguish. The scars of war are not always visible, and they don’t always fade. They haven’t for Merna Gibson and they definitely haven’t for her husband, Frank. He won’t ever forget what has been done to him and his mates. The nightmares, the pain of seeing things a person should never see, stay with him, always. The long-ago war colours their family life.

For Merna, at home on the farm, Japan is very far away. For Frank, it isn’t far enough. But their son, Paul, doesn’t carry the same prejudices. For him, Japan is a place of possibility, a country to embrace. Father and son live worlds apart, even when at the same table. Hate and prejudice have created a gulf between the two.

When a woman comes into their son’s life, it is left to Merna to try and bridge the gap. Caught between the two men she loves she is determined to keep her family together, while everything around them keeps changing.

A powerful story about love, hate and forgiveness that will stir your heart.
Rights

Kate Cooper manages the translation rights for The Return 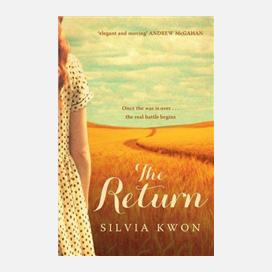