When fugitive Italian monk Giordano Bruno—philosopher, magician, and heretical scientist—arrives in London, he’s only one step ahead of the Inquisition. An undercover mission for Queen Elizabeth I and her spymaster provides added protection. Officially, Bruno is to take part in a debate on the Copernican theory of the universe at Oxford University; unofficially, he is to find out whatever he can about a Catholic plot to overthrow the queen. But when his mission is dramatically thrown off course by a series of grisly deaths and the charms of a mysterious but beautiful young woman, he realizes that somewhere within Oxford’s private chambers lurks a brutal killer. . . 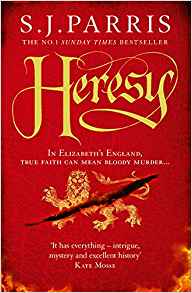