Sir Francis Drake is preparing to launch a daring expedition against the Spanish when a murder aboard his ship changes everything.

A relentless enemy. A treacherous conspiracy.

Giordano Bruno agrees to hunt the killer down, only to find that more than one deadly plot is brewing in Plymouth’s murky underworld. And as he tracks a murderer through its dangerous streets, he uncovers a conspiracy that threatens the future of England itself.

"This is historical mystery fiction at its finest." 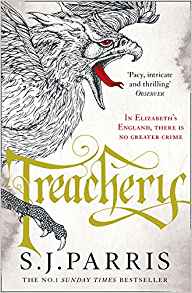