Churchill: The Power of Words

Winston Churchill’s ability to express himself in words was remarkable. In books, articles and published speeches, over a period of sixty years, he used words to tell his personal story, to explain his legislation, to defend his political actions, to illuminate the past, and to inspire those in doubt or danger. Fine writing, humour, irony and foresight were each part of his power of words.

Sir Martin Gilbert began collecting the 100 extracts of Churchill’s words quoted in this book fifty years ago, when he began work for Randolph Churchill as a junior researcher on the life of his father. Each of these 100 readings reflects some facet of Churchill’s life and opinions, including his own accounts of his schooldays, his many near escapes from death, his political views, his contribution to national legislation, and his work during – and reflections on – two world wars. Each extract has been chosen to illuminate Churchill’s life and thinking, and to enable the reader to walk with him through his life, from schooldays to old age, savouring his insights, his enthusiasm and the dramas, setbacks and achievements of his life and times.

Churchill: The Power of Words will constitute a complete and compelling biographical sketch of Churchill, compiled by one of the great and most recognised authorities on his life.
Rights

Kate Cooper manages the translation rights for Churchill: The Power of Words 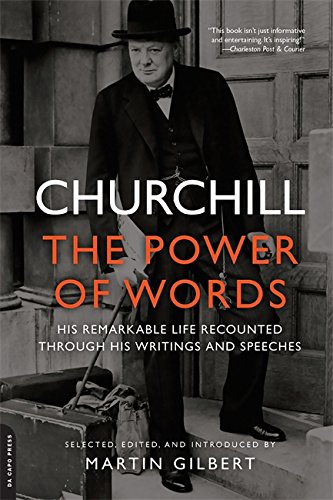