Set in a village of recently freed slaves in the Reconstruction-era South, Conjure Women is the story of a midwife, Rue, who falls under suspicion from her community when they come to fear the magical roots of her healing abilities after the birth of a seemingly abnormal child. Born in his caul, Bean, as Rue names him when his own mother rejects him, has eerie jet-black eyes, a perturbing wail, and seems immune to the sickness that plagues the other children of the village. With the help of Bruh Abel, a traveling preacher who has Rue in his thrall, she undertakes a scheme that will save her reputation from the malevolent rumors and assuage the community’s fear of Bean—if it doesn’t kill Bean first.

Rue’s story is intertwined with flashbacks to the pre-Civil War past, where Rue’s mother May Belle, a midwife and mystic, passes on to Rue her gifts and curses in equal measure. Rue grows up alongside plantation owner Marse Charles’s daughter Varina, playmates even as Varina maintains her dominion over Rue. When Varina is raped by a Confederate soldier at a plantation ball, it is to Rue and May Belle that she turns, sealing their fates together.
After the Civil War, which has laid waste to the familiar order and power structures of the plantation, the ever-present specter of violence gathers new strength. As Rue tries to decide whether to flee North or stay rooted in a home that threatens to turn on her, the past and present converge, the ghosts of her friendship with Varina proving all too vital still.

Like Yaa Gyasi’s Homegoing and Colson Whitehead’s Underground Railroad, with Toni Morrison as its presiding spirit, Conjure Women grapples with the harrowing experience of American slavery, and with the intimate, inescapable cycles of birth and death that carry on its legacy. Atakora writes with an astonishing depth and vision, channeling Rue’s voice with a rare authority.

An engrossing debut…Atakora structures a plot with plenty of satisfying twists. Life in the immediate aftermath of slavery is powerfully rendered in this impressive first novel.

Set on a ruined plantation in the rural South, this lush, engrossing, haunting debut is the coming-of-age story of former slave Rue, whose world is upended in the chaotic aftermath of the American Civil War.

If you are grieving for Toni Morrison, Afia Atakora is the young writer to read now: the kind of historical novelist who makes you believe she must’ve somehow seen the places she describes... Conjure Women illuminates an unfamiliar corner of Civil War history, and brings to life an indelible character whose talents, from midwifery to voodoo, will yield her own unconventional path to power and freedom.

Through complex characters and bewitching prose, Atakora offers a stirring portrait of the power conferred between the enslaved women.

This novel, written in lush, irresistible, and poetic prose, took me into the lives of people in another time and place-- into their loves, nightmares, dreams, their unexpected ties-- and into the hearts of women I could otherwise never know. I was transported. 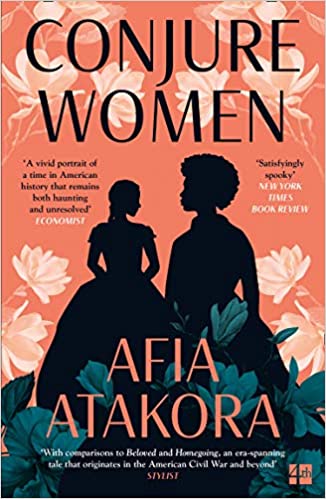