If I Die Tonight

Jackie used to know her sons like she knew herself. But now Wade and Connor are turning into strangers before her very eyes. Wade is smoking, disappearing late at night and now the police are knocking at her door. Suddenly Wade becomes the suspect in a carjacking that has resulted in the death of a 17-year-old boy. Vilified by the press, targeted on social media, and abandoned by his friends Wade faces a fight to prove his innocence. But before Jackie can get to the bottom of the secrets that clouded that night she wakes to a chilling message from Wade on Facebook 'By the time you read this, I'll be dead'.

Liz Dennis manages the translation rights for If I Die Tonight

This novel about the profound unknowability of teenage boys, the volatility of female desire, the complicated messiness of single parenting and the ferocious power of the social media mob is a crucial text for today, a primer of suburban anxiety, hysteria, hypocrisy and fear. Told with fluency and verve, and with a keen eye for a resonant simile – a cop with a “thick moustache that lifted obscenely when he smiled, like a skirt” – and a telling detail – the teenagers huddled in the hospital, all on their phones, “ignoring the ‘No cell phones’ sign . . . which bore a picture of an old flip phone with an antenna and didn’t relate to them at all’ – If I Die Tonight is a marvellous book.

Quite extraordinarily brilliant…enthralling energy that burns page after page…Alison Gaylin is unquestionably a superb story teller. Her tight grip on descriptive prose and dialogue are quite simply a joy to experience, time and time again… Sharp, witty, furiously paced…If I Die Tonight is a total delight from first word to last and thereby cements A L Gaylin amongst the very best writers around

In this moving character-driven standalone...the novel’s lasting impact comes from its indelible portrait of people in crisis

Before you pick up Alison Gaylin's If I Die Tonight, make sure you have some time on your hands. I was hooked from the first page to the breathless conclusion. But make no mistake—it's more than a riveting thriller. It's a deeply moving novel about family, and about our complicated relationships with social media and the truth.

Alison Gaylin, the USA Today bestselling author, puts her strengths as a writer - dynamic characters, family drama, and absorbing plot twists - on display in her new novel If I Die Tonight.

If I Die Tonight is a triumph of sophisticated, stylized storytelling… Absorbing characters, myriad plot twists, and pertinent themes elevate this work beyond genre confines, which is altogether fitting of an author who continues to reach new heights.

If I Die Tonight never falters in its excellent illustration of people on the edge, and it joins the ranks of those mysteries that will prove to be one of the best published in 2018.

Right now, Alison Gaylin is at the very top of her game, crafting exhilarating and audacious crime novels that are both rich in character and rivetingly told. Her books are, quite simply, not to be missed.

You'll stay up late to read this one. Alison Gaylin is a storyteller guaranteed to keep you up all night.

Alison Gaylin is a great storyteller.

This is mind-blowing suspense from an exceptional writer.

With alternating viewpoints, Gaylin weaves a story that's gripping on multiple levels. She keeps readers on the hook with the mystery surrounding Liam's death, but also explores timely issues such as bullying and persecution in the court of public opinion. Each character is complex and achingly human, as real as people you know, in person or on Facebook.

Gaylin's novel is at its most frightening when it reminds us of the dangers of mob mentality in the age of Instagram and Snapchat.

That ‘did he or didn’t he?’ vibe runs through this novel like Blackpool through a stick of rock, but a writer of Alison Gaylin’s skillset won’t let things lie there . . . This is a multi-layered tale that will keep you guessing, and guessing again. Every single character has something to hide and some of the revelations, when they come, are pretty shocking. It’s slick, smart and surprising, with sinuous twists and turns. Go grab a copy – now!

In many of her thrillers, Gaylin shows an uncanny ability to tap into current societal pressures, and If I Die Tonight is no exception. The most prevalent theme here is the terrifying power of social media ... an addictive, absorbing read, but it’s what this book says about us that has the most lasting impact. 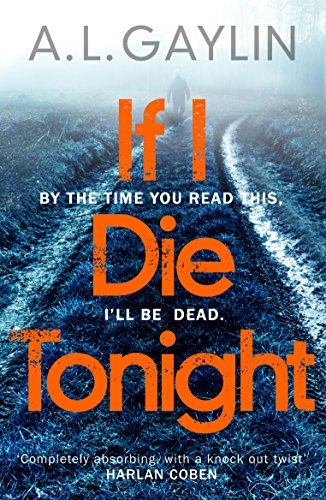