What Remains of Me

Nobody’s perfect. Everybody’s got a drawer somewhere with something hidden in it.

On June 28, 1980—the hottest night of the year—Kelly Michelle Lund shoots and kills Oscar-nominated director John McFadden at a party in his home. . . . And instantly becomes a media sensation, her chilling smile fodder for national nightmares. For years, speculation swirls over the enigmatic seventeen-year-old’s motives, information she’s refused to share. Convicted of the murder, she loses her youth and her freedom—but keeps her secrets to herself.

Thirty years later—and five years after her release from prison—the past has come back to haunt Kelly. Her father-in-law, movie legend Sterling Marshall, is found in a pool of blood in his home in the Hollywood Hills—dead from a shot to the head, just like his old friend John McFadden.

Once again, Kelly is suspected of the high profile murder. But this time, she’s got some unexpected allies who believe she’s innocent—of both killings—and want to help her clear her name. But is she?

Written with masterful precision and control, What Remains of Me brilliantly moves forward and back in time, playing out the murders side by side—interweaving subtle connections and peeling away layers of events to reveal the shocking truth.

Katie McGowan manages the translation rights for What Remains of Me

“A completely absorbing story with a knock-out twist. I loved it.”

Daily Telegraph, Pick of the Week

An absorbing novel with an unexpected twist – I look forward to reading more from Gaylin.

This absorbing thriller will have you hooked.

A twist in every chapter .. a thoroughly satisfying ending.

A remarkable slice of Americana with a narrative that is as hard to put down as it is exciting … written with verve and intrigue.

Full of unexpected, well-hidden secrets that slowly rise to the top … Well-formed and at times, utterly despicable, but realistic characters really make this story.

Random Things Through My Letterbox

With its blend of strong characterisation, assured plotting, attention to location, and moral ambiguity, What Remains of Me, ticked every single box for this reader. It loitered in my head for some while … and that for me is further testament to how good it was.

With great twists and turns along the way, a clever crime novel which I thoroughly enjoyed.

I cannot even begin to describe how bloody awesome this book is! I devoured…DE-VOU-RED this book in a matter of hours!

Gaylin has constructed a narrative that is shocking, sympathetic and a believable exposé of celebrity culture and the industry that feeds off it … superbly executed.

Hair Past a Freckle

Fascinating and intriguing … enjoyed every minute and was sorry to reach the end.

AL Gaylin’s If I Die Tonight, about the profound unknowability of teenage boys, the volatility of female desire and the ferocious power of the social media mob, was an essential primer of suburban anxiety, hypocrisy and fear.

The best crime fiction of 2018
The Irish Times

What Remains of Me is a riveting, emotionally complex thriller, filled with characters who jump from the page and grab your heart until you reach the final, stunning twist. This is Alison Gaylin in top form.

A Crime Novel of the Year

Gaylin, who won several awards for her paperback series about Brenna Spector, delivers a stunning story in What Remains of Me.

Chinatown and Cutter’s Way have nothing on What Remains of Me in terms of a labyrinthine-yet-riveting account of the intertwining of the present and the past in the lives the rich and famous in Los Angeles.

An exceptional book by and exceptional writer. Gaylin is a expert at acute emotional observation combined with seamless plotting. I adored this book.

An elegantly constructed thriller that earns every you-never-saw-it-coming twist. 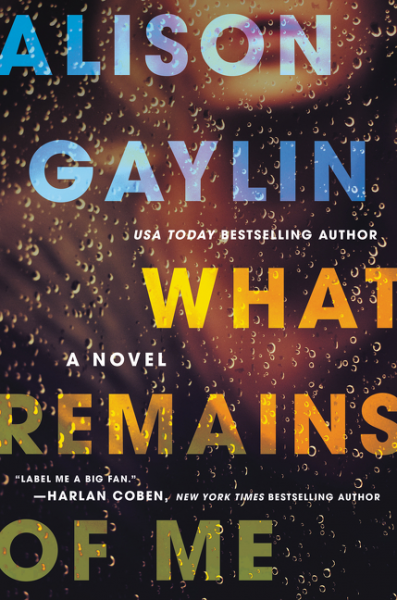