The Burgundy Diaries tells the story of a young American woman, studying to get her Master of Wine degree, who visits her family's winery in France and discovers a secret wine cellar hidden since the Second World War – along with evidence that her prominent wine family might not have behaved as honorably during the war as she had always believed. The American woman slowly uncovers a story that’s been hidden for over sixty years about a teenage girl who struggled to survive the Occupation without betraying her moral code. The two stories interweave, the fate of one girl determining the decisions of the other. The French woman’s story of heroic sacrifice helps the young American woman understand her place and purpose in the world.

Claire Nozieres manages the translation rights for The Lost Vintage

Weaving together past and present and all the complex history of France's relationship with the German occupation of the Second World War and the secrets that are still kept, Ann's Mah's The Lost Vintage is a delightful novel--part love story, part mystery--that unfolds layer after layer of nuance and depth until its symphonic finish and reads like nothing so much as one of the vintage Burgundy wines that are so much part of the story.

What is it that can give home such power over us, even after we leave? Is it our memories, the people we leave behind, or the history that preceded us? Ann Mah explores these questions with great insight and an intriguing story of one woman and her connection to the the wine-growing region of Burgundy, France. Settle down with a glass of your favorite wine and allow yourself to be swept away in this beautiful tale of love, loss, courage and self-discovery.

A gorgeous novel of French food,
wine, and a mystery from the past rapidly unravelling. I couldn’t stop reading
and wanted to savor every word.

The world needs novels like The Lost Vintage: page-turning tales that remind us both of the power of the human spirit and the mystery of the human heart. The Lost Vintage moves seamlessly between the indignities and horrors of occupied France in the Second World War and the pride and passion of serious winemakers in the present. It’s a remarkable novel.

Suspenseful, rich in detail about French food, culture, history and of course wine, the real power of The Lost Vintage lies in its thoughtful and humane rendering of difficult but important truths.

If you enjoyed my Sarah’s Key and Kristin Hannah’s The Nightingale, then this wonderful
book by Ann Mah is for you. I read it in one greedy gobble, couldn’t put it down, and can’t recommend it enough.

Ann Mah’s The Lost Vintage is as rich and complex as a fine French Burgundy — the perfect read for mystery lovers, history buffs, wine drinkers, Francophiles, and anyone interested in visiting the French wine country from a comfortable chair at home. Charmant!

Meg Waite Clayton, bestselling author of The Wednesday Sisters and The Race for Paris

In elegant prose, Ann Mah spreads before her readers a sumptuous feast—a gripping mystery, a heartfelt love story, and a fascinating historical account. Awash in beautifully rendered detail, The Lost Vintage effortlessly glides between the vineyards of modern day Burgundy and the terrors of Nazi-occupied France. Graceful and compelling.

Ann Mah’s The Lost Vintage is everything one could hope for in a novel: A sensual and heartbreaking story of family secrets, lost love, and retribution that unfolds in the magical vineyards of Burgundy. The Lost Vintage evokes all the pleasures of French food and wine, even as it leaves you hungry for answers. Utterly gripping. I couldn’t put it down.

Ann Mah’s THE LOST VINTAGE is as layered, rich, and full of mystery as the best French wine. With admirable agility, Mah alternates between
a modern day vineyard in Burgundy and the terrifying days of the Nazi occupation with such precision and sensory detail that you will find yourself utterly immersed in both worlds. If you do manage to put this book down mid-read, you’ll find yourself half living inside of it until you can open it again and get lost.

Mah, a food and travel writer, brings her love of food and knowledge of wine-making to bear in her second novel, a charismatic blend of mystery, romance, and post-WWII French history.

[Mah's] engaging second novel ... will delight Francophiles and readers who enjoy historical fiction with a twist by such authors as Lauren Willig or Christina Baker Kline. 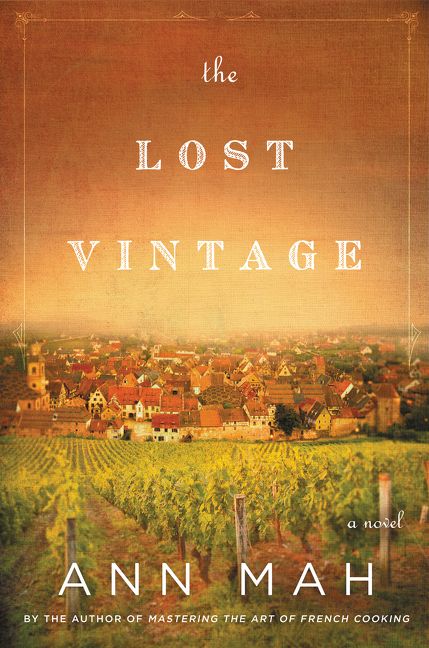