The hit music show was born from the Tin Pan Alley notion that if 'old greys' (doormen) were whistling a tune after one or two plays, the record would have passed 'the old grey whistle test' and become a hit. Bands of the moment would play during the late night slot, using the opportunity to explore their album hits rather than pushing their singles for the charts.

With a focus on serious rock music rather than showbiz glitz, Annie Nightingale took over the show in 1978, injecting a contemporary feel to the show as it began to embrace the punk movement. The slot embraced an eclectic range of musical styles, presenting well-known artists like David Bowie, Roxy Music and Bob Marley alongside bands that gained rare British TV exposure.
Media
Reviews
The Old Grey Whistle Test progressed into the new era under the equally enthusiastic stewardship of Radio 1’s Annie Nightingale.
Record Collector 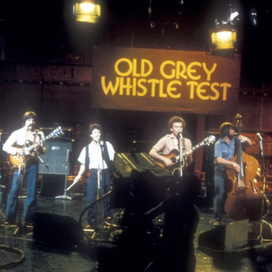