Alex Rider is back in this new novel from Anthony Horowitz!

Alex is in San Francisco, slowly recovering from the traumatic death of his closest friend and mentor, Jack Starbright. But things aren’t going well. He’s failing at school. He has few friends. He feels lost and alone.

But then he receives an email containing just three words – words which lead Alex to believe that Jack may be alive after all.

He sets out on what seems to be a hopeless quest, returning first to Egypt and travelling from there to the South of France and back to the UK. There is no trace of Jack, but his investigation causes him to cross paths with Giovanni and Eduardo Grimaldi, twin brothers and the last surviving members of Scorpia. The Grimaldis are planning something called Operation Steel Claw, involving a Sikorsky CH-53E “Super Stallion” helicopter, which they have stolen from the Americans. They will kill anyone who gets in their way…and suddenly that includes Alex.

Never Say Die is one of the most dramatically ambitious of the novels so far... The suspense never slackens and the plot, even at its most far-fetched, is underpinned with nerdishly forensic detail, which has an irresistible "how stuff works" appeal.

The Alex Rider stories are action adventures about defeating cartoon villains who are intent on global domination, but, although Alex is brave and athletic, what really makes him and the books special is his ingenuity... The series not only has explosions and chases: it shows that cleverness can win.

The Sunday Telegraph
Children's Book of the Week

Anthony Horowitz is second to none when it comes to writing page-turners so his fans will be thrilled to read the new Alex Rider novel.

This latest story is as exciting as its predecessors. An unputdownable read with breath-taking action and enough clever plot twists to make the reader dizzy.

Readers who like their adventure action packed will love the new Alex Rider novel, Never Say Die, by Anthony Horowitz. Our favourite teen spy whizzes around the world, from San Francisco to Egypt, at breakneck speed. 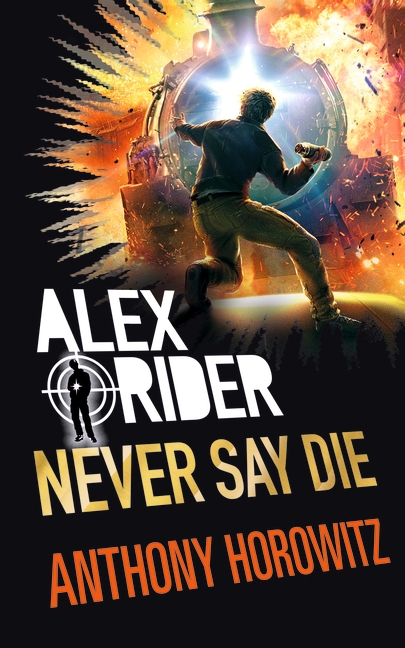